Cargo ships in the Strait of Hormuz.

The Strait of Hormuz is once again a center of global tensions. The Middle East’s crude oil and natural gas flow through the narrow sea conduit to international markets, making it the world’s most critical transportation “chekepoint.”

Incidents there — such as Iran’s seizure of a British tanker and attacks on ships in 2019 — can whipsaw energy prices and send shipping and insurance rates rocketing. Regional tensions flared again after the U.S. killed a top Iranian general in January 2020 and some shippers briefly avoided sending vessels through the strait. The Islamic Republic has periodically threatened to shut the vital waterway, prompting the U.S. and U.K. to step up their military presence amid calls to ensure it stays open.

1. Where is the Strait of Hormuz?

Shaped like an inverted V, the waterway connects the Persian Gulf to the Indian Ocean, with Iran to its north and the United Arab Emirates and Oman to the south. It’s about 96 miles (154 kilometers) long and 21 miles wide at its narrowest point, with the shipping lanes in each direction just two miles wide. Its shallow depth makes ships vulnerable to mines, and the proximity to land — Iran, in particular — leaves large tankers open to attack from shore-based missiles or interception by fast patrol boats and helicopters.

Attacks on oil tankers in 2019 raised tensions around the Strait of Hormuz.

It’s essential to the global oil trade. Tankers hauled about one third of the oil moved at sea through the strait – 20.7 million barrels a day of crude, condensate and refined fuels in 2018, according to the U.S. Energy Information Administration. The strait is also crucial for liquefied natural gas, or LNG, with more than a quarter of the world’s supply, mostly from Qatar, passing through it annually.

Volume of crude oil and petroleum liquids transported in 2018

3. Why would Iran disrupt the strait?

U.S. sanctions, particularly those aimed at stopping oil sales, have pushed Iran’s economy into recession, prompting President Hassan Rouhani to accuse the U.S. of waging “economic war” against his country. Disrupting the strait demonstrates that Iran has the power to inflict pain in return on the U.S. and its allies by restricting the flow of energy and driving up prices. Any boost in the price of oil can also help make up for the revenue Iran is losing from lower sales due to sanctions. “We certainly have the ability to” shut the Strait of Hormuz, Iranian Foreign Minister Javad Zarif said in July 2019, adding that Iran wouldn’t want to do so “because the Strait of Hormuz and the Persian Gulf are our lifeline.” 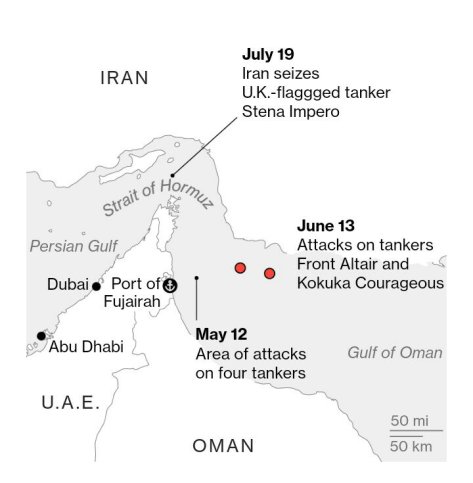 4. Could Iran really close the waterway?

Closing the waterway entirely would be self-defeating, preventing Iran’s own exports of petroleum and starving it of revenue. Oil traders doubt the country would ever go that far. Iran’s navy also is no match for the U.S. Fifth Fleet and other forces in the region. Iran is still capable of considerable disruption. In July 2019, its Revolutionary Guard, which is charged with maintaining the security of the Persian Gulf for the country, seized a U.K.-registered tanker, owned by Sweden’s Stena AB, in the strait. Iran said the ship had violated maritime rules. It also suggested the move was in retaliation for the U.K.’s seizure of an Iranian tanker near Gibraltar on suspicion of violating sanctions against Syria. The vessel was freed more than two months later, after the Iranian tanker was released from custody in Gibraltar. Earlier in July, the British Navy had intervened to prevent a tanker operated by BP Plc from being blocked by Iranian vessels as it passed through the strait.

Strait of Hormuz – A Timeline of 2019 Events

5. Has the strait been closed to traffic before?

No, but it has seen its share of conflict. During the 1980-1988 Iran-Iraq War, Iraqi forces attacked Iran’s oil export terminal at Kharg Island, in the Persian Gulf northwest of the strait, in part to provoke an Iranian retaliation that would draw the U.S. into the conflict. Although Iran didn’t try to shut the strait, there followed a so-called Tanker War during which culprits from both sides attacked 451 vessels, most carrying oil or refined petroleum products. That significantly raised the cost of insuring vessels, increasing the cost of oil exports. When sanctions were imposed on Iran in 2011, threats were again made to close the strait, but these were subsequently denied by Iran’s foreign ministry.

6. Can the strait be protected ?

During the 1980s Tanker War, the U.S. Navy resorted to escorting vessels through the Gulf. In 2019, the U.S. dispatched an aircraft carrier and B-52 bombers to the Persian Gulf, but repeating the 1980s operation would tie up large parts of U.S. and allied fleets. President Donald Trump, in a Twitter posting in June 2019, questioned why American forces should be responsible for protecting ships from other countries as they make the “dangerous journey.” The U.K., Australia, Bahrain and the United Arab Emirates joined the U.S.-led International Maritime Security Construct, formerly known as Operation Sentinel, which was established in response to the 2019 attacks. South Korea is contributing personnel and Japan is sending a ship to waters outside the Strait of Hormuz. Owners of tankers that ply the Gulf face spiraling costs. War risk premiums paid every time a ship enters the region surged from $30,000 in early 2019 to $185,000 in June, while cargo rates more than doubled to $26,000 per day. The rates remained elevated into 2020.

7. Who relies most on the strait?

Iran, Kuwait, Qatar and Bahrain export all their exports of oil and, in the case of Qatar, LNG through the strait. Ninety percent of Iraq’s exported oil goes through it as well. The U.A.E. can partly bypass the strait by sending 1.5 million barrels a day via a pipeline from its oilfields to the port of Fujairah on the Gulf of Oman. Saudi Arabia has the greatest ability to divert flows from the risk zone, by using a 746-mile mega-pipeline across the country to an export terminal on the Red Sea. Saudi Aramco said the capacity of that line would be increased to 6.2 million barrels a day by the end of 2019 and would be able to transport 7 million barrels on a “temporary” basis. Aramco transported 2.1 million barrels a day of crude through the link in 2018. The East-West pipeline was attacked in May 2019 by an unmanned aerial vehicle carrying explosives, shutting it down briefly. While the higher oil prices triggered by any closure of Hormuz would hurt consumers everywhere, the biggest impact would be felt in Asia; two thirds of the crude passing through the strait in 2019 ended up in China, India, Japan or South Korea.

– In Morgan Stanley, Philip Morris and Union Pacific are among some of the major companies set to report earnings before the opening bell -.

At around 04:30 a.m. ET, Dow futures rose 5 points, indicating a negative open of more than 6 points.Futures on the S&P and Nasdaq were slightly higher.The moves in pre-market trade come amid heightened concerns about the health of the world’s largest economy.

At around 04:30 a.m. ET, Dow futures rose 5 points, indicating a negative open of more than 6 points. Futures on the S&P and Nasdaq were slightly higher.

The moves in pre-market trade come amid heightened concerns about the health of the world’s largest economy. On Wednesday, unexpectedly weak retail sales data fuelled fears about a possible recession.

… Global economic data points to slower growth while the U.S. manufacturing sector is already contracting. In the center of those worries is the ongoing U.S.-China trade war, which is becoming increasingly uncertain.

In Europe, the Northern Irish Democratic Unionist Party (DUP) said Thursday that it could not support the British government’s Brexit plans “as it stands.”

The announcement dealt a blow to the chances of Prime Minister Boris Johnson securing a Brexit deal, with only two weeks left before the world’s fifth-largest economy is scheduled to leave the European Union.

Back in the U.S., investors are likely to closely monitor a flurry of economic data and earnings reports on Thursday.

The latest weekly jobless claims figures, housing starts for September, building permits for September and the Philadelphia Fed’s manufacturing index for October will be released at 8:30 a.m. ET. Industrial production data for September will follow slightly later in the session.

In corporate news, Morgan Stanley, Philip Morris and Union Pacific are among some of the major companies set to report earnings before the opening bell.

Intuitive Surgical, Bank OZK and First Financial are among those scheduled to report their latest quarterly figures after market close.

Mexico’s economy will expand 1.5% to 2.5% in 2020, according to the proposal submitted by Finance Minister Arturo Herrera ahead of Sunday night’s deadline. Analysts in a Bloomberg survey on average see an expansion of 1.5%, with none expecting growth to exceed 1.9%, which is also the International Monetary Fund’s forecast in July.

The plan calls for a primary surplus, which excludes debt interest payments, that’s equivalent to 0.7% of gross domestic product. That compares to 1% expected for 2019. Investors have been awaiting the plan to check for fiscal slippage as AMLO, as the leftist is known, balances spending on social services, security and Petroleos Mexicanos against the constraints of a stalled economy.

“Overall, a relatively fair budget, but the assumptions on growth and oil production are definitely on the optimistic side,” said Alberto Ramos, chief Latin America economist at Goldman Sachs Group Inc. “The key question for investors and markets will be whether the administration is ultimately strongly committed to deliver the 0.7% of GDP primary fiscal target or not.”

The plan foresees oil output of 1.951 million barrels per day, implying an increase of about 18% from recent levels. After years of declines, state oil company Petroleos Mexicanos, or Pemex, stabilized its production at 1.66 million barrels a day in the second quarter. The proposal includes 86 billion pesos ($4.4 billion) to help Pemex via tax breaks and other measures. 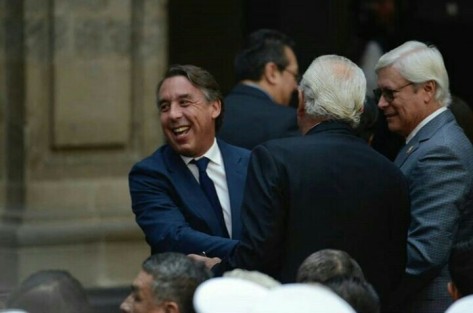 The budget is the first that AMLO will send to Congress with his full imprint. The government had just two weeks to prepare the 2019 budget after he took office in December, which also left Congress with little time to debate it. 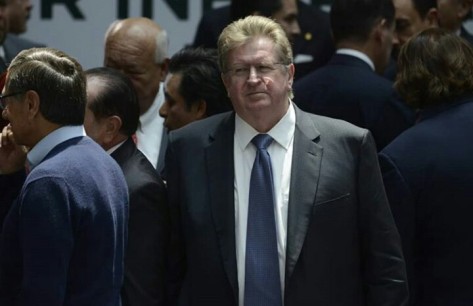 Herrera and other officials had promised in recent days that the 2020 plan would be fiscally responsible and reassuring to investors. The peso was little changed at 19.5383 per dollar on Sunday night immediately after the budget plan was revealed

The government on Sunday also lowered its growth projection for this year to 0.6% to 1.2% — down from an April forecast of 1.1% to 2.1%. That’s still above the outlook of the central bank, which sees an expansion of as little as 0.2%. Policy makers cut Mexico’s benchmark interest rate last month for the first time in five years, shaving a quarter point from a decade-high 8.25%.

Even with the government’s rosy scenarios, the 4% average growth that AMLO has promised over his six years in office looks hard to attain. The finance ministry in April in a preliminary budget document had projected growth of 1.4% to 2.4% for next year as well as a primary surplus of 1.3%.

“The fiscal goals on their own may not look so bad, but the adjustment could be interpreted as a sign that the commitment to fiscal goals that AMLO has kept until now could be eroding,” said Felipe Hernandez of Bloomberg Economics. “Investors could start asking more questions.” 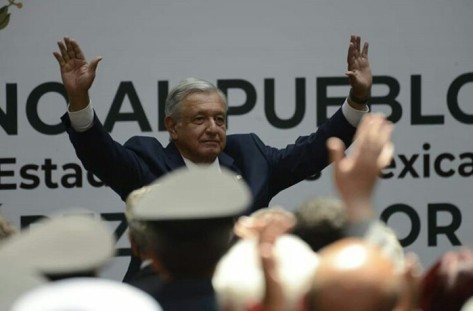 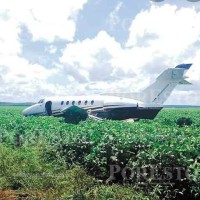 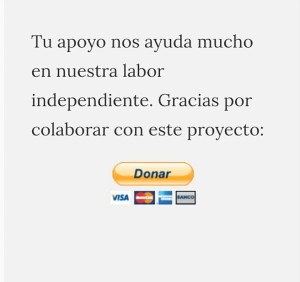